“We owe it to our children to be better stewards of the environment. The alternative? – A world without whales. It’s too terrible to imagine.”

From the very beginning, humans and all our previous species have been trying to prove our supremacy over others in our society and on the nature. We have constantly exploited the environment which has more than provided for us. We are continually waging a war against mother earth and all its humble creatures. We have developed weapons of mass destruction to protect us from our own species. And we use it against the nature. Even though we are small in size compared to other beings, we have always tried to subdue other animals with our weapons. And in this futile war, we have destroyed the environment which has supported our lives for such a long time.

We know that the environmental food chain is very delicate and removal of one organism, however small, will result in large-scale upheaval and the collapse of a properly functioning ecosystem. We cannot just imagine as to what would happen if all the species of whales died.

If life forms, as big as whales, were to vanish from our oceans there would be serious irregularities in the carbon cycle. Whales help in stabilizing the carbon content in the water with their excreta. They also keep the krill and the phytoplankton population under check.

For years countries have been killing whales for commercial purposes to such an extent that a lot of species are on the brink of extinction. Whale meat is sold off in markets across nations for consumption. Whale oil and blubber is used to manufacture cosmetics and the bones serve as trophies.

After we realised that the whale populations were nearly depleted and many had almost gone extinct,[1] the United Nations formed the International Whaling Commission in the year 1946 where countries from all over the world signed the International Convention for the Regulation of Whaling. The commission set up rules which prohibited whaling in certain waters and imposed a complete ban on killing of certain species of whales which were on the brink of extinction.[2]

But the convention provided some exceptions in cases, such as ‘aboriginal whaling’ where an ethnic group reserves right to hunt whales because it is their custom to do so and their livelihood completely depends on it. However, they are also regulated by a quota. Another exception was that of ‘scientific whaling’ which has been much exploited by nations involved in illegal whaling. Nations like the Empire of Japan and Iceland have been long covering their commercial whaling expeditions as scientific whaling[3] and have been killing whales at an unprecedented rate. The infamous Japanese whaling vessels Nisshin Maru and Yushin Maru killed more than 75 whales in a hunting season of 89 days. Japan justified its position by saying that it is their custom and that the country had always posed a demand for whale meat for consumption by households.

In the year 1985, a complete ban was placed on whaling, but very few countries honoured it. 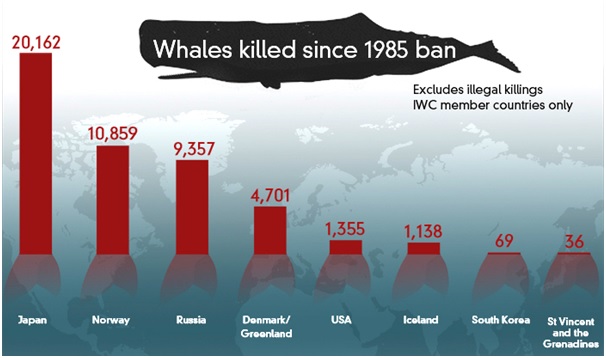 Seeing the Japanese vessels violating the Convention Regulation in high seas, Australia brought a case against the Empire before the International Court of Justice. The ICJ delivered its judgement on the 31st of March 2014 declaring the whaling activities of Japanese in Southern Ocean as illegal. While the judgement did not declare scientific whaling as illegal per se, but the whaling activities of Japan have been ordered to come to a complete stop. Following the order, Japan had to cancel the planned hunt, but their whaling continues in other oceans.

Organisations from the world over have been protesting against whaling and want the complete ban to be enforced. Greenpeace, Sea Shepherds and World Wildlife Fund have been making efforts to achieve the enforcement of the ban. 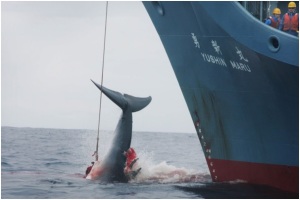 Killing whales is a barbaric practice. The weapons used by the whalers are horror inducing. The basic weapon which all the whaling vessels posses are harpoons. These are mounted on the stern of the vessel and are used to hit whales. When the harpoon enters the whale’s body, it explodes, causing internal injuries. The animal does not die immediately, but very slowly bleeds to death as it is dragged backwards towards the factory vessels which clean, process and store the meat.

The whale takes a long time to fully mature and reproduce. Therefore the reproduction rate is very low. Whaling ships usually leave the whale calves as they don’t provide much meat. But Japan just blew it out of proportions when it hauled a calf on board the Nisshin Maru along with its mother. If the whale populations are not protected we might not be able to make a successful recovery and the environmental balance will fall into complete disarray. Whale watching has also become a huge source of income and has increased revenues from tourist expenditure. If whales are not protected, not only the environment, but also a lot of economies will suffer as a result of indirect impact. We have to ensure that the demand for products made from the whales’ bodies fall so that no more whales or their calves are slaughtered in the name of scientific whaling.

Things need to change, and change fast. We should be able to assert that our planet is our priority, not this (an excerpt from The Song of the Whale)-

[1] According to data collected by Sea Shepherds, an Australian society aimed at protecting whales, 5 out of 13 species of whales are endangered, out of which two are critically endangered (Blue and Grey Whale). The endangered species include Blue whale, Fin whale, North Pacific Right, North Atlantic right and Sei Whales. See Sea Shepherds. Viewed on 17 June 2014 (http://www.seashepherd.org/index.php).

[3] In 2002, the World Wildlife Fund published an open letter to the Japanese (in both Japanese and English text) in the New York Times signed by a group of international scientists, stating their assertion that “Japan’s whale ‘research’ program fails to meet minimum standards for credible science.” They accused Japan of “using the pretense of scientific research to evade its commitments to the world community.” (http://en.wikipedia.org/wiki/Whaling_in_Japan).

One thought on “MEET US, DON’T EAT US”